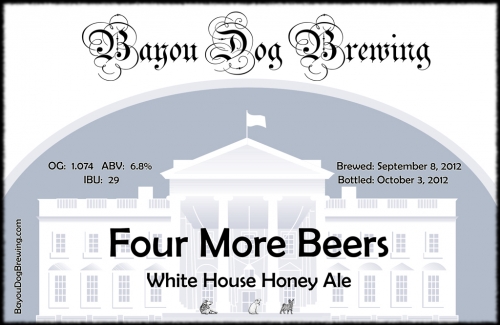 There was certainly a whole bunch of hoopla around the White House releasing their beer recipes…of course, most couldn’t resist either the political cheers or jabs. Whatever the political alliance, this is a win for homebrewing.

My first reaction was something like, “Extract brewing?!? Lame!” But the more I thought about it, these guys are beginners, and probably have very little time to read up on the subject…you know, with preparing State Dinners for dignitaries and making snacks for teenagers. I have no doubt these chefs could get a lot better at brewing over time. Plus, any advanced homebrewer knows how to convert these recipes to all grain.

However, we decided to make them as is, with the only change being how we hopped it. (But that was more for practical reasons.) I had forgotten how quick and easy it was to make beer with extracts, but we also forgot how expensive it is!

* – I don’t believe they wrote this recipe trying to closely adhere to a given style. However, it’s also my belief that an English Extra Special Bitter (ESB) is closest in style. This recipe has slightly more alcohol and slightly less hops than an ESB should have. However, the use of traditional English hops, an English yeast, and the addition of gypsum as a flavoring component (as opposed to a water ion modification for one’s own water source) all point to an English pale ale…with ESB being a compromise between SB hopping, and IPA gravity.